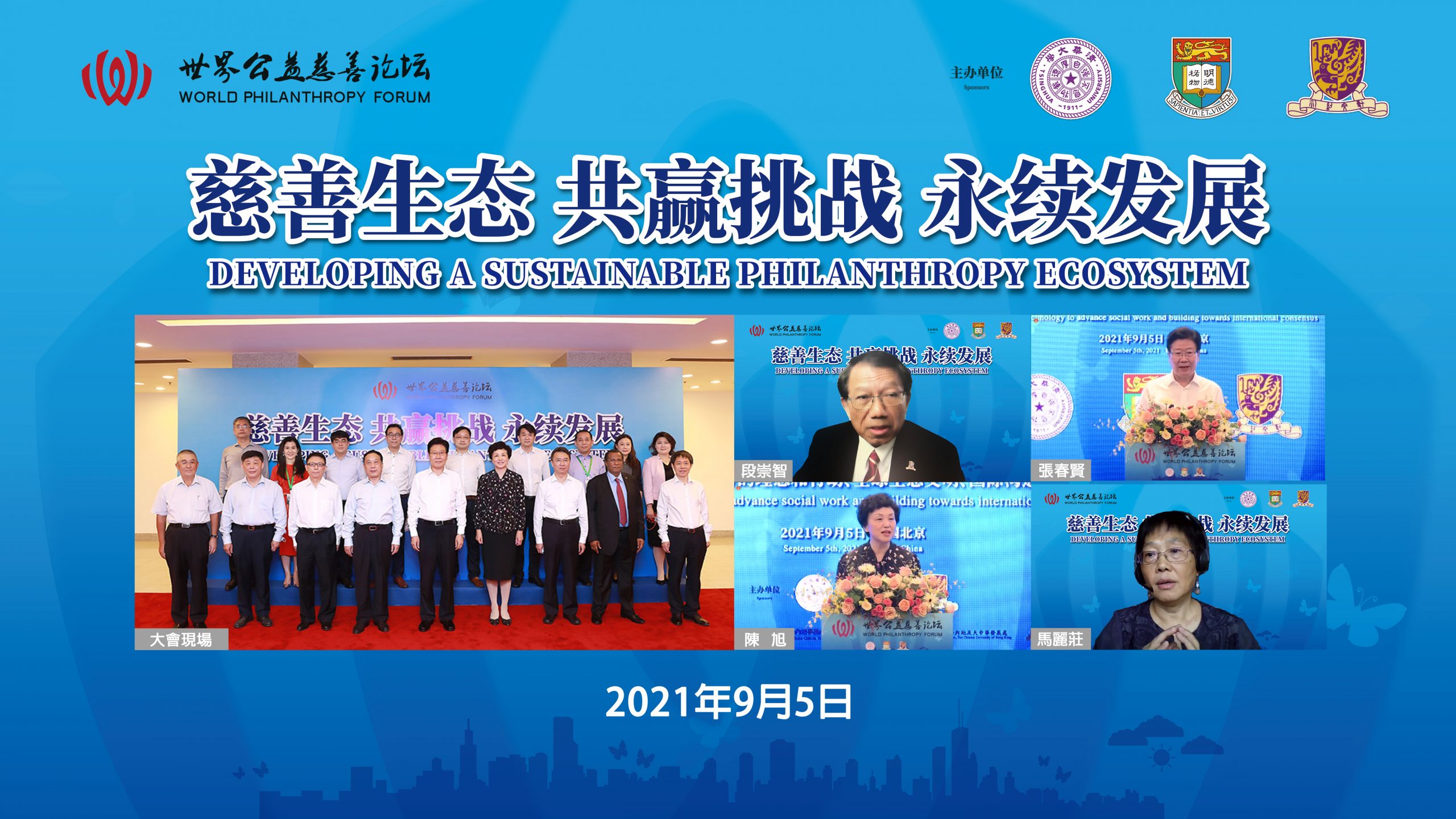 The theme of the Forum this year is “Developing A Sustainable Philanthropy Ecosystem”. The event focused on topics such as technology for social good, social services, eco-civilization and international consensus, aiming to create a broader space for public welfare and promote the professional development of the world charity and public welfare industry. Mr. Zhang Chun-xian stated that the vigorous development of philanthropy is one of the major revelations arsing from COVID-19 to us. We shall face the challenges of risks in a calm manner, engage social forces, and promote the overall development of humanity and society. Professor Rocky Tuan said that universities have the responsibility to face the challenges of global sustainable development and must play a leading role. Through the platform of World Philanthropy Forum, CUHK will continue to work together with partners to tackle challenges, strengthen social cohesion, and promote the peaceful development of the country and the world.

The World Philanthropy Forum has become an international platform for experience sharing, academic exchange, policy advocacy and promotion in philanthropy and social services. This year it was held to redefine common interests, pursuits and values of mankind, thus promoting philanthropy and human civilization, enhancing contact and morality and advancing the development of world peace. 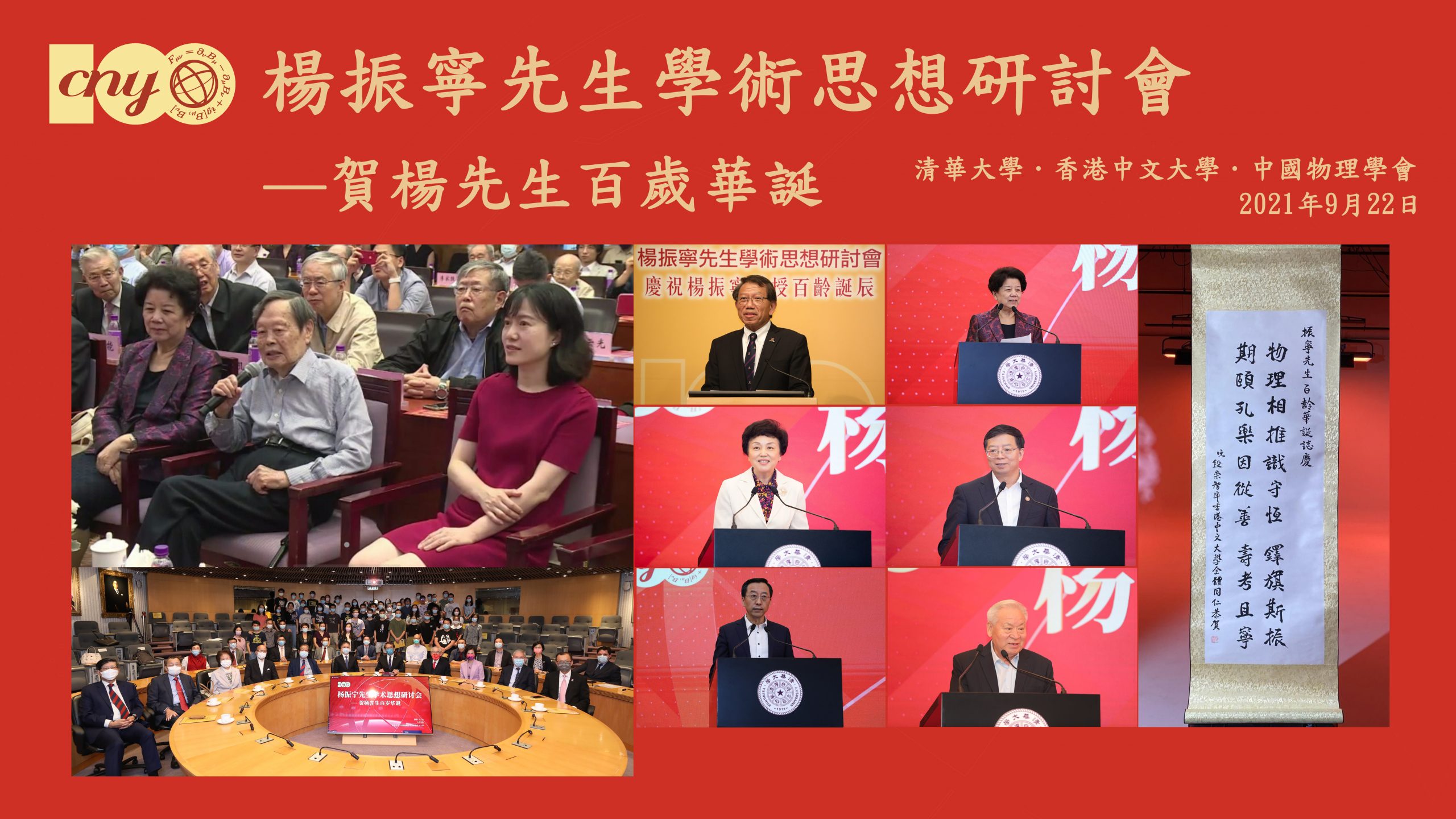 To celebrate the 100th birthday of Professor Yang Chen Ning, the first Chinese Nobel laureate in Physics, Distinguished Professor-at-Large and Director of Institute of Theoretical Physics at the Chinese University of Hong Kong (CUHK), Tsinghua University, CUHK and the Chinese Physical Society co-organized a Forum on the Academic Contributions of Professor Yang Chen Ning on 22 September. Prominent leaders, scientists and scholars in science and education around the world attended the events at Tsinghua University and on CUHK campus to pay tribute and congratulations to Professor Yang. CUHK Vice-Chancellor Professor Rocky Tuan, CUHK senior management, Professor Yang’s friends at CUHK, and many CUHK professors and guests joined the Forum on campus via video connection.

In his speech, Professor Tuan expressed the respect and affection of CUHK colleagues to Professor Yang: “Professor Yang is a well-known and highly acclaimed scientist who has made extraordinary achievements in scientific research. He has such spirit of studying and serving the world and has become a model to the world for his learning on the road of scientific research, his courage to challenge old thinking, to break through rigid ideas, to create new theories, and his effort to blend Chinese and Western cultures in promoting the vigorous development of academia, as well as his dedication to passing on knowledge. I am particularly grateful that he has been with CUHK for nearly sixty years. He has established scholarships to help advocate learning and cultivate talents. He also donated medals, books, manuscripts and other valuable items to CUHK. I would like to express my sincere gratitude to Professor Yang for his support and dedication over the years.”

Professor Yang Cheng Ning thanked everyone for their congratulations: “Thanks to Tsinghua University, The Chinese University of Hong Kong and the Chinese Physical Society for co-organizing this event to celebrate my 100th year birthday of the lunar calendar, and I thank so many friends for coming as well.”

CUHK senior management and guests also visited the exhibition “Professor CN Yang at 100 — Grand master of physics, stalwart friend of CUHK” at the University Gallery of CUHK University Library. The selected items on display include his research papers, manuscripts, publications and graduation certificates as well as photographs. These documents recorded his journey to a distinguished scientist and his long association with CUHK is especially featured. 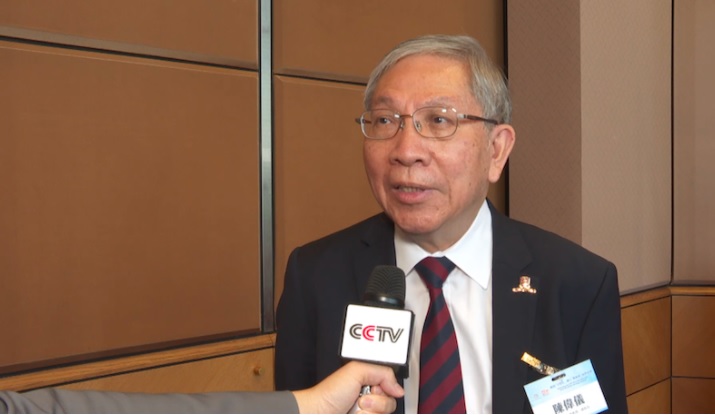 Prof. Chan Wai-yee, Pro-Vice-Chancellor of CUHK is interviewed by the China Central Television

The talk on the National 14th Five-Year Plan was held at the Central Government Offices on August 23. It was attended by more than 200 guests, including a delegation led by Mr. Huang Liuquan, Deputy Director of the Hong Kong and Macao Affairs Office of the State Council; Mr. Luo Huining, Director of the Liaison Office of the Central People’s Government in HKSAR; the governing team of the HKSAR Government; Mr. Carlson Tong, Chairman of the University Grants Committee; and senior representatives of universities. Prof. Chan Wai-yee, Pro-Vice-Chancellor of The Chinese University of Hong Kong attended the talk and was interviewed by the China Central Television. Prof. Chan said during the interview: “It is very important for the talk to reach Hong Kong’s academics and to allow Hong Kong’s young people to see the development of the Mainland. It conveyed a crucial message that they are not outsiders and that the Central Government cherishes their contribution.”

The National 14th Five-Year Plan establishes a clear positioning for Hong Kong’s future development, covering three major development directions from political, economic and social perspectives. It has raised for the first time its support for Hong Kong in four emerging sectors, namely supporting Hong Kong to enhance its status as an international aviation hub and develop into an international innovation and technology hub, a regional intellectual property trading center and a hub for arts and cultural exchanges between China and the rest of the world. It also mentions the support for high-quality Guangdong-Hong Kong-Macao Greater Bay Area development.

The Real-time Live Chat with Astronauts in Tiangong Space Station was held on 3 September at the Hong Kong Convention and Exhibition Center. The Chief Executive, Mrs Carrie Lam; Dr. Tan Tieniu, Deputy Director of the Central Government’s Liaison Office in the HKSAR; and about 300 participants from Hong Kong science and technology industry, teachers and students attended the event. Professor Rocky Tuan, Vice-Chancellor of The Chinese University of Hong Kong (CUHK); Ms. Wing Wong, Director of China Engagement of CUHK joined the activity on behalf of the University. Three astronauts Nie Haisheng, Liu Boming, and Tang Hongbo on Tiangong space station conducted real-time online conversations with audience. Apart from giving a virtual tour around the Tiangong Tianhe core capsule, they answered questions to enable deeper understanding of the achievements of the national manned space project. 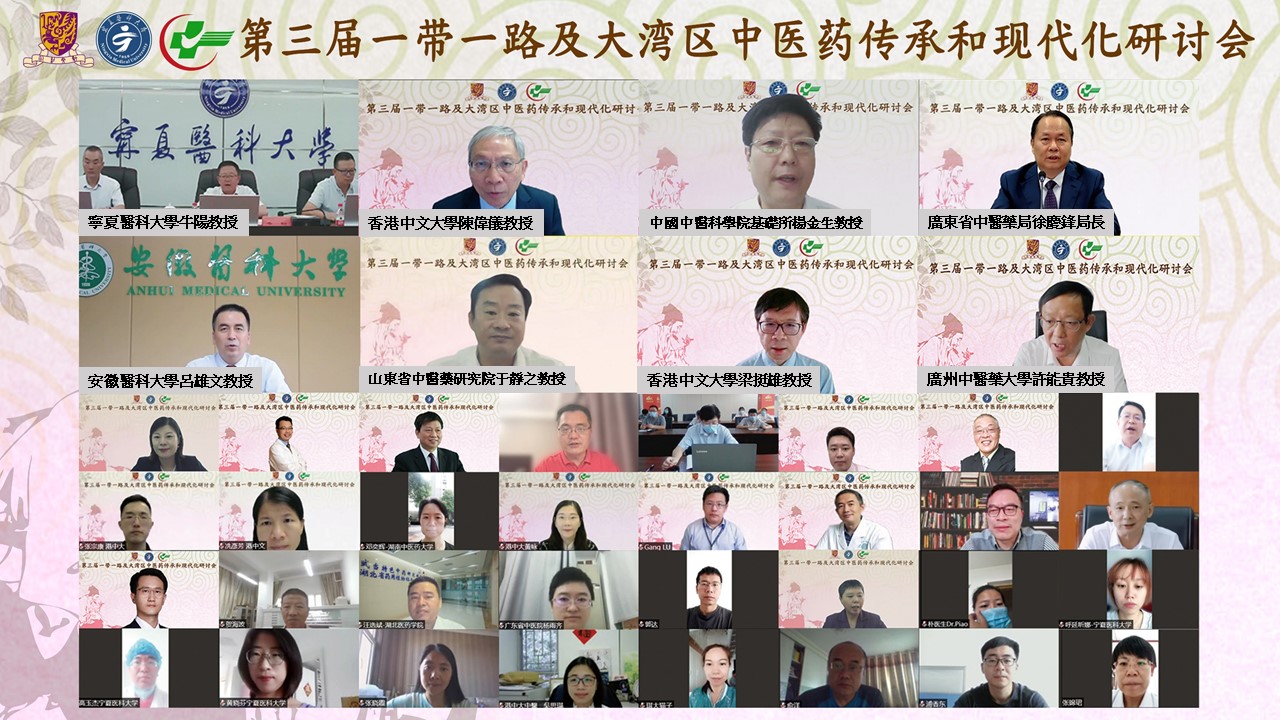 First organized by CUHK in 2019, this symposium serves to enhance the levels of research on the foundation, transformation and clinical application of Chinese medicine, and to establish research networks for scholars with an international outlook to make joint efforts in promoting the continuous development of Chinese medicine.

Alliance of International Science Organizations Online Open Conference cum Workshop on Global Health was held on 23 September, co-hosted by Alliance of International Science Organizations (ANSO), Chinese Academy of Sciences (CAS) and University of Belgrade. The Global Health Workshop focused on topics in relation to major health concerns, the impact of COVID-19 on the Sustainable Development Goals, and methods to strengthen international cooperation. Various internationally renowned experts were invited to speak and discuss the issues at the event. The Chinese University of Hong Kong (CUHK) Vice-Chancellor Professor Rocky Tuan delivered a keynote speech entitled “Social Factors of Global Health” at the Workshop. He stated that the world must work together to deal with global health risks and strengthen international communication and cooperation, so as to jointly face health issues including those arising from pandemic situation for the well-being of mankind.

Initiated by CAS, ANSO is an international, non-profit and non-governmental scientific organization for identifying and addressing common issues in the Belt and Road Region to tackle world scientific challenges. Founding members include scientific and research organizations from Russia, Pakistan, Poland, Hungary, Nepal, Kenya, Netherlands, New Zealand and Brazil. CUHK is the only institution from Hong Kong in the Alliance. 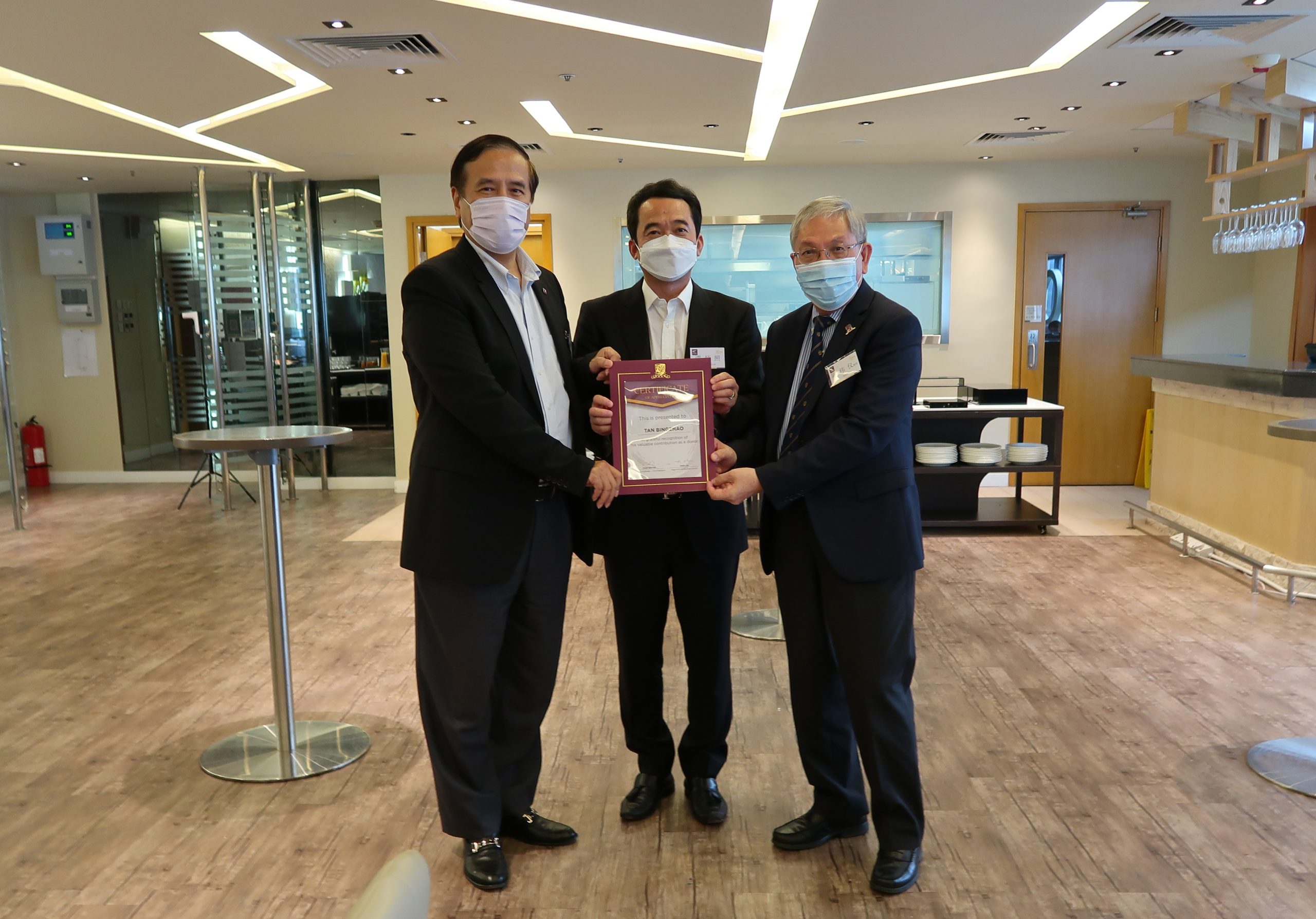 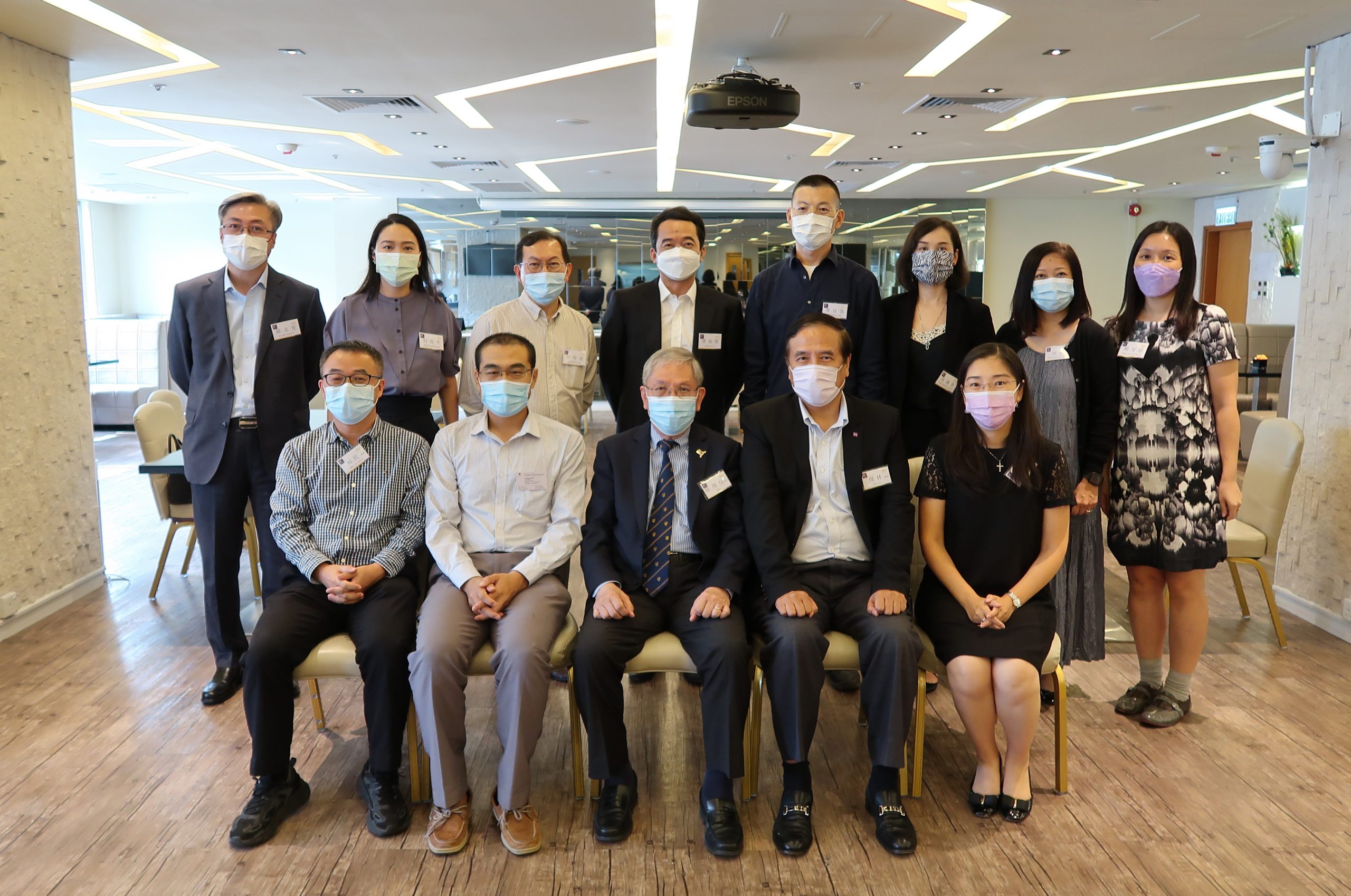 The Mainland Postdoctoral Sponsorship Programme was initiated by the China Engagement Office of CUHK in 2021 to further strengthen the cultivation of outstanding scientific research talents and to promote the cooperation between Mainland and Hong Kong institutes.