Appointed by Vice-Chancellor Professor Rocky Tuan of The Chinese University of Hong Kong (CUHK) and President Xu Yang-Sheng of The Chinese University of Hong Kong, Shenzhen [CUHK (SZ)], the two universities jointly established a Task Force as a platform to promote collaboration between the two campuses.  The Task Force is co-chaired by Provost Professor Alan Chan of CUHK and Vice President Professor Tom Luo of CUHK (SZ) with the aim of strengthening the ties to bolster and elevate the University’s presence towards the accomplishment of strategic goals.  Qian Hai project has served as the source of opportunity which comprises of the establishment of research institutes in areas of global and contemporary China, and digital economics.  In addition to campus development and technology transfer, the Task Force will leverage on the opportunities arising from the development of the Greater Bay Area to explore exchanges and interactions in research and education, including joint supervision of students and cooperation in the Loop area, so as to drive the development of a comprehensive CUHK brand in competitiveness and status locally, nationally and internationally.

The Task Force has regularly meetings to report the progress of collaborative projects and the consensus is to work together, invest together to enhance the integration and development of the two campuses with joint efforts and mutual benefits.

Four subgroups were established under the Task Force to steer and support joint initiatives in different areas, namely Education, Research & Commercialization, New Initiatives, and Human Resources & Finance Policies. The Subgroups are co-chaired by PVCs and Vice Presidents of both universities in corresponding areas and meetings are held where in need to provide reports to the Task Force.

Recent developments under the Task Force

The Education Subgroup endorsed the collaboration agreement on joint supervision of PhD students in Engineering and the proposal on student interflow activities. 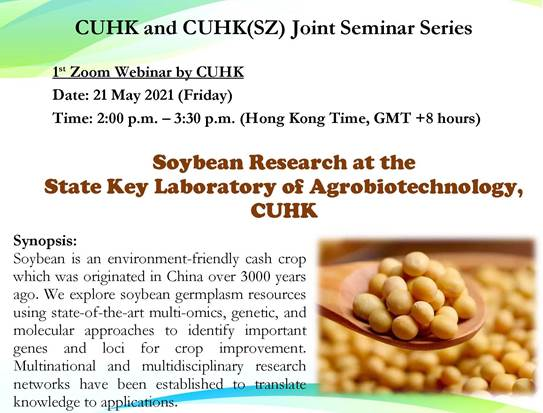 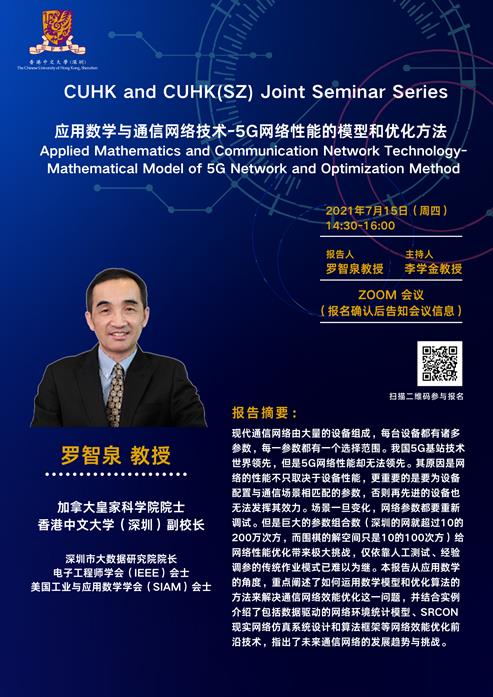 The Chinese University of Hong Kong (CUHK) and The Chinese University of Hong Kong, Shenzhen [CUHK (SZ)] Joint Seminar Series is organized and planned by the Research & Commercialization Subgroup with the aim of serving exchange platform for research collaboration between the two campuses. Showcasing the research strength with talks given by distinguished scholars, the joint seminars have shared the latest research achievements in selected research areas with scholars and students from the two campuses to receive cutting-edge knowledge and strengthen interactive exchanges.

Two seminars have been organized online in May and July 2021, respectively entitled “Applied Mathematics and Communication Network Technology – 5G Network Performance Models and Optimization Methods” and “Soybeans Research at the State Key Laboratory of Agrobiotechnology. The seminars were well received by the two campuses with more than 100 participants in each one. Subsequent seminars will be held with themes relating to environment and sustainable development, as well as China studies.